Aikido is a Japanese martial art based on the principle of Ki, that is, the harmony or balance of energy. Seeking to control an attacker by first blending with the incoming attack then redirecting its energy.

Aikido does not require great physical strength or aggressive spirit, it is practised by people of all ages and physical constitution, and by women as well as men. Based on full and natural body movement, Aikido exercises every portion of the body. Flexibility, co-ordination, balance and quick reactions are all developed through the study of Aikido.

It benefits fitness, posture and mental awareness. It will certainly help build self-confidence. And along the way you'll also have fun and make friends !

Taking the attacker's balance both physically and mentally and then controlling the movement is important in Aikido. The development of the use of Ki rather than strength is important.

Many of the movements in Aikido are based on movements with sword and other weapons. 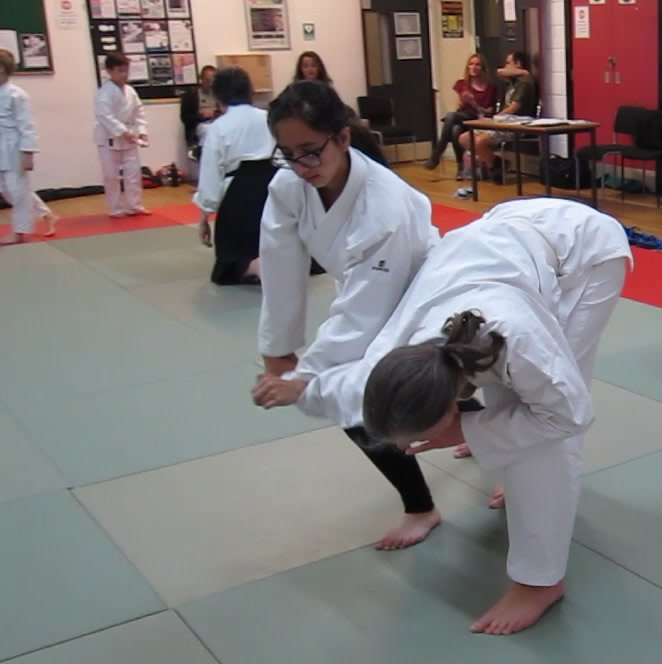 Aikido translates from the Japanese as "The Way of Harmony and Spirit".

Aikido is an art that does not seek to meet violence with violence and yet retains its martial origins.

Aikido is essentially non-aggressive and non-violent. It is based on spherical movements by which an attacker's aggressive force is not met with force, but is instead deflected or turned back on itself. It includes both throws and joint locks, which, although effective and painful, are applied so as not to cause injury.

However, although it is defensive by nature, make no mistake, it is very effective – that is why it is used by many police and armed forces around the world. Aikido, has since its conception, been non-competitive, however, several styles have now evolved from the parent of "Traditional" Aikido.

It is the Traditional Form that we study in Trafford Aikido.

We think the benefits are:-

In Aikido we think of our ‘partner’ as someone to work with in order to achieve a mutual goal rather than our ‘opponent’, which implies a struggle against one another. This makes learning Aikido much easier as every student passes on what they have learned with their fellow students to their future partners. This cooperation between students makes for a friendly and helpful dojo environment.

"Ultimately, you must forget about technique.
The further you progress, the fewer teachings there are.
The Great Path is really No Path"